THOMAS ACKER, BOW MAKER WITH INTUITION AND A PERSONAL STYLE 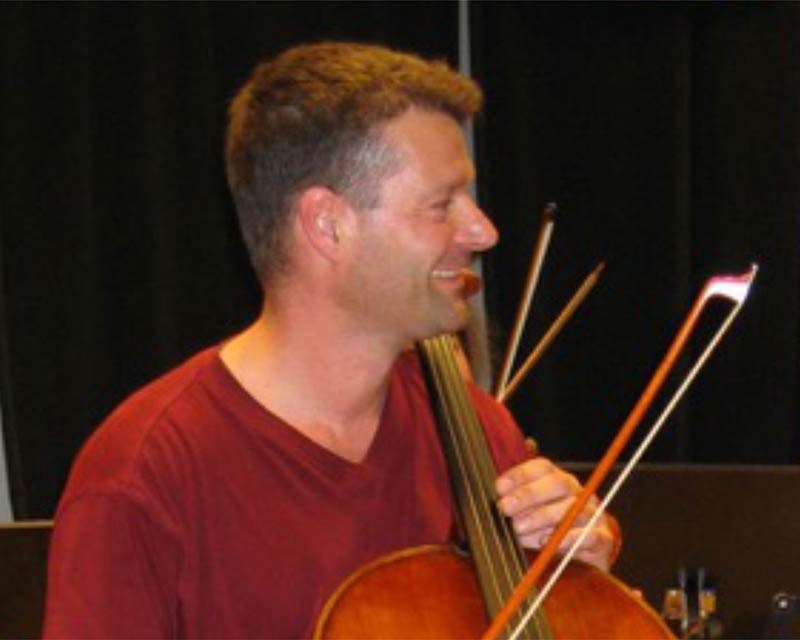 It is not far from Erlangen to the neighbouring village of Bubenreuth, where stringed and plucked instrument construction is still a major factor of local economic life. The young Thomas Acker, who was interested in woodwork, came here from his hometown of Erlangen to start an apprenticeship with a company producing bows for stringed instruments.

Actually - he says with a smile - he did not originally intend to become a bow maker: he comes from an environment that does not much value classical music and music culture.

It may be coincidence or fate that Thomas became a bow maker. I imagine that it was a challenge to get involved in something completely new. Not just the new materials and mastering the craft

and the skills, but the whole world of stringed instruments, of music, composers, musicians, their traditions and their stories.

After all, a violin bow is not an arbitrarily crafted piece of wood. Nor is it just a crafted product, but rather an artistic one that makes strings vibrate and music come to life. It is a piece of wood - to express it pathetically - that has a soul, and in which, if you like, the bow maker incorporates his own soul.

Thomas, who incidentally now almost exclusively listens to classical music, and even plays the cello, puts it like this: ‘One becomes more and more what one does!’

What he does, he does with full enthusiasm and joy. Not only his bows, but also the glimmer in his eyes testify to this when he talks or is asked about his work: radiant and yet humble. In general, he does not necessarily seem to be someone who talks a lot, but a person who intuitively senses and perceives. Sensing and perceiving is also his job: He begins by selecting and studying the wood, through working the material and then intuitively sensing which bow is suitable for which musician.

Thomas makes bows exclusively in one-off production. He only used to make them in serial production in the factory where he completed part of his training. That's how you learn to work in the flow, he says. But the times in which he produced thirty to forty bows per month are in the past. He now makes an average of three bows per month, neither in series nor by categories, but real individual pieces that occasionally - especially if requested - deviate from the so-called school requirements in terms of standard measures. Thomas clearly has an interest in things that are out of the ordinary, and besides - he says - he's only doing what he loves.

In this respect, his bows all possess personality and style, above all. The term ‘beauty’ spontaneously comes to mind, although the bows are not just beautiful - because that would be so boring, according to Thomas.

No, they have that certain something: subtleties in their design that point to their maker. For example, he breaks the edges of the frog's ebony - which is rather untypical, but definitely has a visual appeal - not to mention that it is more comfortable for the thumb. The frogs are alternately mounted in silver or gold. He often adds artistic gimmicks, marquetry or ornaments just as he, the maker - or, of course, the client - pleases.

Like most of his colleagues, Thomas uses pernambuco from the forests along the Brazilian Atlantic coast, which has been the material of choice for bow making since the early 19th century. Since the trade in pernambuco is currently problematic, Thomas stores a few cubic metres of the precious material in his cellar. From the very start of his work on a new bow, the colour and weight of the wood give him an idea of what sort of bow it might become, and how long it will take to make. Anyone who talks to Thomas about his work - or, rather, about his passion - senses his deep attachment to the material, which has a grain so fine that it almost mirrors.

Anyone who orders or buys a bow from Thomas can be sure that they will receive a piece that is tailor-made for them. It's best to visit his workshop in Erlangen, or to meet him at exhibitions. He examines the bow that a musician currently uses, talks to the musician, asking whether or not they are satisfied with their current bow, and what they might like to be different.

He also takes a close look at the musician. It is about observing the playing, the individual poise of the bow, capturing how the musician handles the instrument, the music, and his or her own personality. Then, Thomas knows very quickly what the customer wants or needs. As an outsider, I dare to suggest this because his customers’ satisfaction speaks for itself.

In the twenty or so years that he has been making bows, Thomas has not only acquired experience and skill, but something very special and beautiful, something that exists between him, the material, the workmanship and the finished bow.

It is - I would almost say - a kind of love affair.